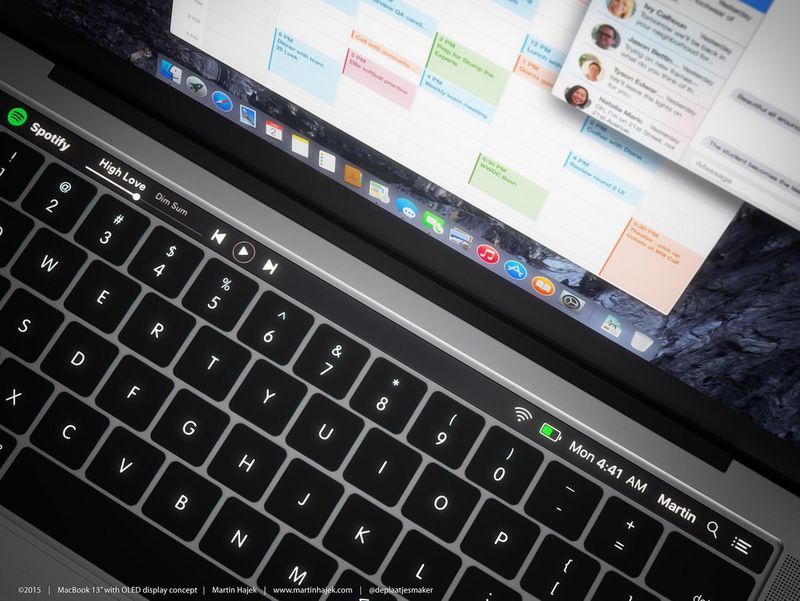 Apple is preparing a big update to its MacBook Pro line of laptops. The company is planning to replace the function keys on the MacBook Pro with an OLED touch bar, and now Bloomberg’s Mark Gurman is confirming the initial reports, according to KGI Securities analyst Ming-chi Kuo. The new MacBook Pros are said to be slightly thinner than current models, with a wider trackpad and an option for amd polaris graphics in at least one model.

Bloomberg says that Apple doesn’t intend to launch the new MacBook Pros at an event on September 7th, where it’s expected to release a new iPhone and additional Apple Watch model.

Apple is also expected to include USB Type-C on the new MacBook Pro, alongside a Touch ID fingerprint reader. Bloomberg said, “Apple has tested versions of the upcoming laptops that integrate the scanner beside the new function key display.”

Apple is also rumored to be considering gray, gold, and silver color options for the new MacBook Pro.

The most intriguing addition to the MacBook Pro is the secondary display above the keyboard. Designed to replace the function keys, Bloomberg reports that it will be a strip like screen that shows functions on a task-by-task basis and will simplify keyboard shortcuts. The panel could show media controls when iTunes is open or cut and paste commands when Microsoft Word is running.

However, Apple hasn’t announced an official date for its iPhone event (rumored for September 7th) yet, and it is possible the company could now refreash its MacBook Pro line without an onstage event.